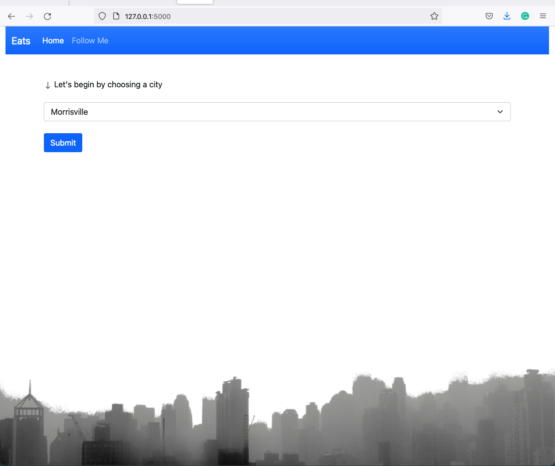 Shut up and take me to the code

The title pretty much speaks for itself, and if you’ve been following along, you’d know that I’m working on a demo application that uses Flask (a web application microframework) connected to my Oracle Autonomous Database (ADB) via Oracle REST Data Services (ORDS) APIs.

One of Flask’s strengths is that it allows you to extend functionality and allows for a good bit of customization. But…

By default, Flask does not include a database abstraction layer, form validation or anything else where different libraries already exist that can handle that. Instead, Flask supports extensions to add such functionality to your application as if it was implemented in Flask itself.

Why ADB and ORDS?

I’m primarily using this specific configuration (with ORDS and ADB) for obvious reasons. But secondarily, I haven’t come across anything that actually references the Oracle ADB or ORDS (in the context of Flask, WTForms, and python of course).

Most of the online tutorials I’ve seen and books I’ve read reference SQLlite or (in one case) MongoDB for the database. SQLite does seem like a good entry point, especially if you are putting together a proof of concept. But as things scale, I suspect you’ll reach diminishing performance returns with SQLite. In fact, the Flask documentation mentions exactly that:

Python comes with built-in support for SQLite in the sqlite3 module. SQLite is convenient because it doesn’t require setting up a separate database server and is built-in to Python. However, if concurrent requests try to write to the database at the same time, they will slow down as each write happens sequentially. Small applications won’t notice this. Once you become big, you may want to switch to a different database.

That last sentence is significant. I know ORDS can be set up with High Availability in mind, so why not take advantage of that from the beginning? Also, with my ADB, the effort to create a database schema and tables is very minimal (fun even).

Regarding, MongoDB, obviously, I’m biased but I’m also disorganized. And I’m still a “technical toddler.” So having to download, install, and configure MongoDB Community Edition plus the MongoDB Compass GUI would end up being an unnecessary step for me (I actually ended up doing this for a previous tutorial).

Regardless, I already have my OCI tenancy and my Autonomous Database, and I continue to get more and more comfortable with our ecosystem.

Moving on…I also want to use Database Actions, and the REST API features provided by ORDS. Not to mention, from everything I’ve seen in the Flask tutorials you have to first create database models before you can do anything really meaningful. I’m not entirely sure how to go about that (please check back in 2023).

ORDS is straightforward – just give me the URI for the API endpoint and I’ll take it from there. If I need something additional we can modify the API accordingly.

API GET Request response (via ORDS)

Speaking of which, here is what the JSON looks like from my ORDS-powered API GET request:

I won’t spend too much time explaining this image (you can read about it in detail, here), but I’m most interested in the city: (found under items). There are 18 cities, and I’ll need all of them for Flask. More specifically, I need them for WTForms.

I won’t give a crash course on WTForms, but bottom line it’s another way to extend the capabilities of Flask.

WTForms is a flexible forms validation and rendering library for Python web development. It can work with whatever web framework and template engine you choose. It supports data validation, CSRF protection, internationalization (I18N), and more.

In my scenario, WTForms allows me to easily make and handle (as in routing) forms in the Flask application. More specifically, there is a SelectFields() form that I need to use (this is just how I initially designed the app, you can review it here).

The forms have fields. Here are details on the form I’m most interested in:

You’ll notice there are various parameters I can include, but all I care about are the choices[]. You can either hard (static) code in a list of choices, or (as I just successfully did as of this week), pass a list from an API GET request to the choices[] parameter.

If you’ve looked at the documentation, then you’ve seen that choices[] can be”passed” in one of three ways:

My approach used the first option. Actually, the values-only approach, in my case.

First, I’ll show the dropdown list; it will look like this in my application (FYI this actually works):

I know that video is fast, but you should be able to see the dropdown list (at around the :15-:17 mark) and how it renders.

This dropdown list is made possible from an initial GET request to my ORDS-enabled “Cities” table. And the code in its entirety (including the Flask bits), looks like this:

With the brief explanation out of the way, here is the code. Please, help yourself:

Obviously, you’ll want to change up some of the names. But the ORDS pieces should remain pretty similar.

My next steps are to create a second and third dependent dropdown for the app. What I mean is that, based on a user’s city selection, that city would then be used as a query parameter for a subsequent GET request (to my ADB). And ORDS would respond with a list that includes restaurant information for the target city (everything else would be excluded).

If you’ve made it this far and you have any questions, please send me a note.

And if you think this is worth sharing, and that it might help others, please pass it around!

As always, you can find me on: