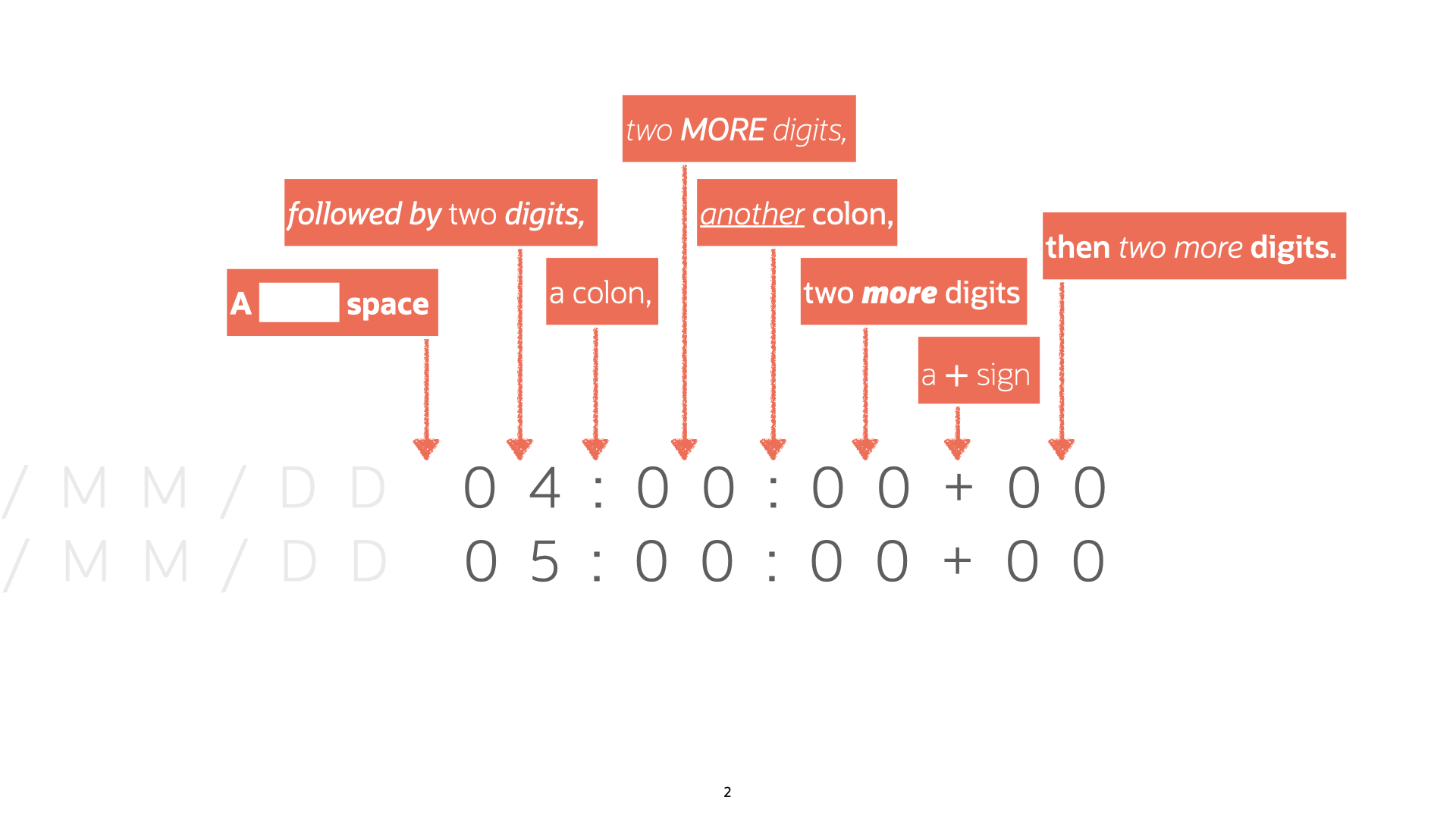 I log into Database Actions as my newly created “Python Developer” and navigate directly to the “Data Load” page (found under the Data Tools section of the Launchpad). I choose to “Load Data” from a “Local File.” I click “next,” click the pencil icon (see the arrow in the image), and navigate to the “File” tab. I scroll to the “RESTAURANTOPENDATE” column and see this:

But in the spirit of doing things in five days, when they could have taken but five minutes, I opted to see if I could achieve a similar result in python.

Create a python script that will allow you to remove part of a value in a .CSV file.

I am confident there is a way to achieve this goal with the .CSV library in python. There is probably a way to do this with python out of the box. I couldn’t figure it out.

I’m also reasonably confident that my approach is on the verge of ridiculous. Nevertheless, Regular Expressions, and the Pandas library, in python are what worked for me.

What are Regular Expressions?

Good question. I still don’t know, but here is what I found on Wikipedia:

“A regular expression (shortened as regex or regexp; also referred to as rational expression) is a sequence of characters that specifies a search pattern in text. Usually, such patterns are used by string-searching algorithms for “find” or “find and replace” operations on strings, or for input validation. It is a technique developed in theoretical computer science and formal language theory.”

That is so painful to read, but the way I understand it is that we use Regular Expressions in pattern-matching. Essentially you create a pattern and then tell your application (or script) to search for it. From there, you can include more code to perform more actions. In my case, those actions would be to find a pattern and replace that pattern with nothing.

So what is the pattern?

One of the benefits of having zero formal training in application development (in this case, computer science and formal language theory) is that occasionally, you might take an approach that, while unintuitive, works well enough.

And after many, many hours of trial and error, parsing through Stack Overflow, reviewing hours of YouTube, reading pages of blogs, and occasional use of the “I’m Feeling Lucky” button on Google, it occurred to me that my pattern was:

After reviewing more documentation and other various resources (I have an entire section at the end), I more clearly identified a pattern:

Coming up with a clearly-defined pattern helped inform me as to how I could create the following Regular Expression:

I then did some more stuff, and that was it! Follow me for more…

I can’t teach you everything, because I’m probably only ahead of you by a week at this point. But I can explain, in the hopes that it will make sense. Let me continue with the above Regular Expression (again, you’ll want to spend some time in the resources section I’ve included to understand better how this all fits together).

But the above Regular Expression can be defined like this:

I then took the above and plugged it into this nine (12 with sections, slightly more with comments) line script:

Code as an image for reference:

In short, (I’ve left detailed comments for reference), these nine lines of code search for a pattern and replace it with nothing when found. We then take these results (including the rest of the .CSV file) and save them to a new file called “newrest.csv.”

Please, reference this script. Tweak it as needed. Or drop me a note if you need an outside perspective. Good luck!

Pickle, Pandas, and RE are all required for this script to work.

The rest is pretty straightforward.

I then went back into Database Actions (it had been so long that I’d expected a new version had been released already), loaded my data, and inspected the column in question:

Looks good to me!

Something I noticed was that my Autonomous Database automatically recognizes the “RESTAURANTOPENDATE” column as a data type of “Date.” I didn’t have to do anything special here, and I thought this was pretty cool. Take a look:

Addendum to the addendum

Once imported, you can also use Regular Expressions in your database (with SQL). But if you’d like to clean your data before it reaches your ADB, the approach I’m writing about here is also a great option!

As promised, here are all the resources I’ve curated that might assist you should you choose to take the road less traveled…

An even simpler solution

I discovered an even simpler solution to this problem. As I was reviewing the Pandas documentation I noticed there was functionality built directly into Pandas. This can be done with the “datatime” function.

And you can take it one step further with what is referred to as a “.dt accessor.” (you’ll see this in the updated code I’m including). This accessor allows you to manipulate a Series (aka a column) within a Pandas dataframe (df).

There are quite a few time-date properties you can manipulate in Pandas, all of which can be found here. The “Time Zone Operations” section is where the “.dt accessor”, is briefly mentioned. For more context, I’d recommend reviewing this section on the .dt accessor and how they interplay with a Pandas Series.

Don’t stop there though, the main python documentation discusses the basics of date and time operations. Without further ado, on to the new code:

This code is certified fresh – meaning, it works. I triple-checked. The only thing I’ve noticed is that lines 12-14 must-have “.dt.date” at the end. From what I am reading (and am inferring from the documentation), it looks as though you need to first “treat” the Series with the “to_datatime” function. After that, the entire dataframe is in limbo (not quite written out to a new .CSV), waiting. Before the next step, we can strip the time portion out using the .dt accessor (i.e. the “.dt.date” portion located at the end of lines 12-14).

From there it is simply a matter of writing out these updated dataframes to the three new expectant .CSV files.

Please come back for more. I’m going to be working on views in my Autonomous Database, and then later, I’ll REST-enable them with the help of ORDS!

2 thoughts on “Clean up a .CSV file with Regular Expressions, Pandas, and Python”